Western Australia (WA) is the largest state in Australia, located on the western side of the country. Due to its 2.5 million square kilometres of landscape, WA is a very diverse state with white beaches, deserts and forests. 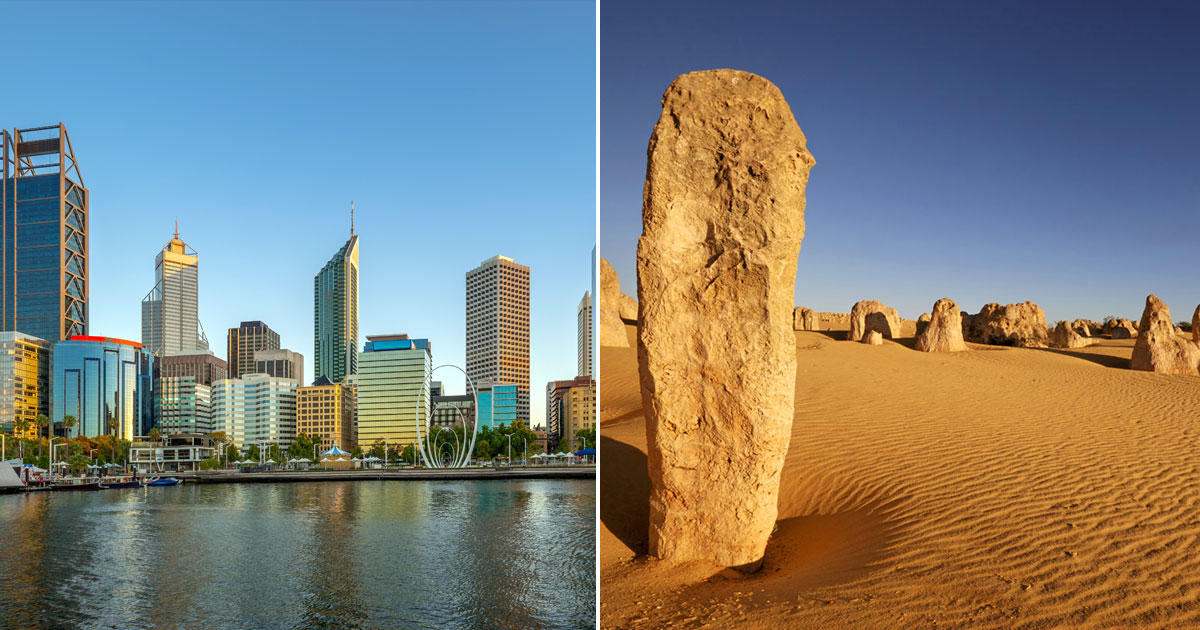 WA’s capital, Perth, is often ranked one of the world’s most liveable cities due to its beautiful weather and cultural heart. On any day, you can visit art galleries, theatres, festivals, restaurants, sporting events, live music and more.

Perth is also very safe, as it has a much lower crime rate than other major cities. Many international students consider WA one of the best places in Australia to study.

WA makes up one-third of Australia on the western side of the country. It shares its borders with South Australia and Northern Territory, and is bound by the Indian Ocean in the north and Southern Ocean in the south.

Despite its size, WA’s population isn’t much larger than other states because most of WA’s land is infertile and eroded. WA has several large deserts, including the Great Victoria expanses, the Gibson and the Great Sandy. Therefore, most people live in the south-western region where the state’s capital, Perth, is located.

WA’s climate is as diverse as its landscape. The populated south-western region has temperate weather with hot summers and mild winters. Rain tends to fall mainly in this area. The rest of the state is arid or semi-arid due to the deserts. Here you will experience very hot days and cold nights.

Western Australia has a population of 2.67 million people, almost 80% of whom live in Perth. This population is wonderfully diverse, with residents of more than 200 nationalities speaking more than 170 languages. You’ll find 100 different religions being practised here.

WA is a very welcoming and friendly state, which is why so many international students feel comfortable studying here.

Western Australia has a very strong economy, bringing in more than 30% of Australia’s export income.

This has created thousands of well-paid jobs and the lowest unemployment rate in the country. WA workers are also well paid, with the average full-time worker making $67,059 a year – among the highest in the country.

These are some of the major industries in WA that contribute to this economic success:

Western Australia is often called Australia’s ‘Education City’ due to the number of world-class universities, vocational institutions and English language colleges in the state. More than 42,000 international students from 140 countries enrol in WA universities every year.

The science sector is a popular study area, as all five of WA’s universities conduct cutting-edge research projects with leading global institutions. You can be involved in life-changing projects, such as vaccine development, clean water projects, and climate change projects.

As a student, you can work up to 20 hours per week. Perth provides a wide range of part-time job opportunities in communications, hospitality, housekeeping, administration, tourism and retail.

Like all WA students, you can get 40% discounts on public transport within Perth if you have a tertiary smart rider card. Perth also has a free bus service, which operates between Perth, Fremantle and Joondalup.

After you graduate, you can apply for a Temporary Graduate Visa – Subclass 485, which allows you to stay in Australia to work for two to four years.

Colleges and TAFEs in Western Australia